Reapers of the Water

The nets newly tarred
and the family arranged
on deck-Mass has started.

The archbishop in
his golden
cope and tall miter, a resplendent

figure against an unwonted background, the darting
silver of water,
green and lavender

of the hyacinths, the slow
movement of occasional
boats. Incense floats

up and about the dripping gray
moss and the sound of the altar bell
rings out. Automatically all who have stayed

on their boats drop to their knees with the others
on shore. The prelate, next taking up his sermon,
recalls that the disciples of Christ were drawn

from the fishermen
of Galilee. Through
the night, at the lake, they cast in vain.

Then He told
them to try once more, and lo!
the nets came heavily loaded…. Now

there will be days when
you, too, will
cast your nets without success-be not

discouraged; His all-seeing eye
will be on you. And in the storm, when

your boat tosses like a thin
leaf, hold firm….
Who knows whose man will be next? Grand’mére

whose face describes how three of hers-
her husband and those two boys-had not returned,
now looks toward

her last son-
it is a matter of time. The prelate dips his gold aspergillum

into the container of holy water
and lifts it high. As the white
and green boats

pass, the drops fall on the scrubbed
decks, on the nets, on the shoulders
of the nearest ones, and they move up

the long waterway.
The crowds watching and waving:
the Sea Dream, the Normandie,

the Barbara Coast, the Little Hot Dog, the God
Bless America, the Madame of Q.-

racing past the last tendrils
of the warm pudding
that is Louisiana.

This poem originally appeared in James Tate’s first collection of poetry entitled The Lost Pilot (Yale University Press, 1967). Here’s a recording of Tate introducing and reading the poem (minute 5:27). In the introduction, Tate says this poem is about the blessing of a shrimp fleet he saw in Thibodeau, Louisiana. Here are some fleet blessings so you can add his intended imagery to the unintentional images that may also be spurred on in your mind by his lines. Long live JAMES TATE! 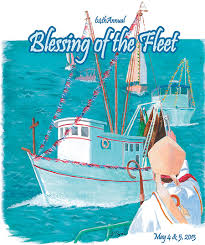